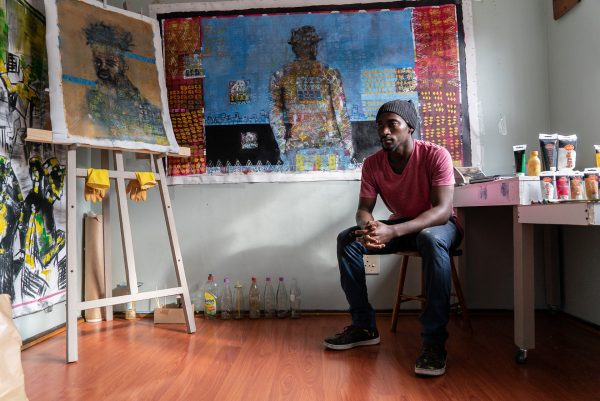 Nkalashe is inspired by how African people have evolved creatively as well as the evolution and contribution of traditional patterns in a contemporary style society.

Buhle Nkalashe born in 1994 as South Africa became a democracy, is a Cape Town-based independent artist who has been practicing since 2011.

Nkalashe, a painter and mixed media artist, explores the combination of different mediums.

Throughout his life, Nkalashe has been exposed to many cultural events and ceremonies particularly in his Xhosa culture.

At these gatherings, people perform rituals and ask for a blessing. During the celebration, songs are sung which tell stories and traditional clothes are worn, mainly depicted in weddings.

Traditional clothes are very colourful and have patterns. This can also be seen in beadwork.

Nkalashe is fascinated by the idea that patterns and colour can be a symbol of identity.

Inspired by how African people have evolved creatively and the evolution and contribution of traditional patterns in a contemporary style society. Nkalashe noticed how young African people have borrowed elements from their culture to express their identity through their profession.

He noticed that the Xhosa, Zulu and Ndebele patterns are similar in terms of colour and Nkalashe felt that he needs to reimagine these patterns together in a contemporary African setting to create a new hybrid South Africa.

Nkalashe said on his Behance: “I began my career as a Graphic Designer but have returned to my first love, which is art, and I am now a mixed medium painter. I am inspired by a new generation of young African creatives; my work is both playful and profound shown by the use of color and pattern.”

He obtained his BA in Graphic Design from the Cape Town Creative Academy (2018). After working in advertising for two years, He shifted his focus to Visual Arts in 2019 to become a full-time artist.

Nkalashe had his debut solo exhibit, The New African, at Youngblood Africa Gallery (2018) in Cape Town.

He is known for his contemporary artworks executed through large canvases. His work mainly consists of portraiture and abstract paintings which are made from a mixture of mediums (charcoal, acrylic paint, oil paint and oil pastels).

Nkalashe was also invited by Red Room Contemporary Gallery to exhibit at the Turbine Art Fair (2019).

His current work can be described as an exploration of how he sees the world and possibilities that come with it.

Nkalashe has reconnected with his inner child and has been liberated by it. In this body of work, the artist shares memories and creativity he had when he was a child.

He believes that by projecting the voice of his soul in these artworks, he can encourage others to walk in the journey very few do.