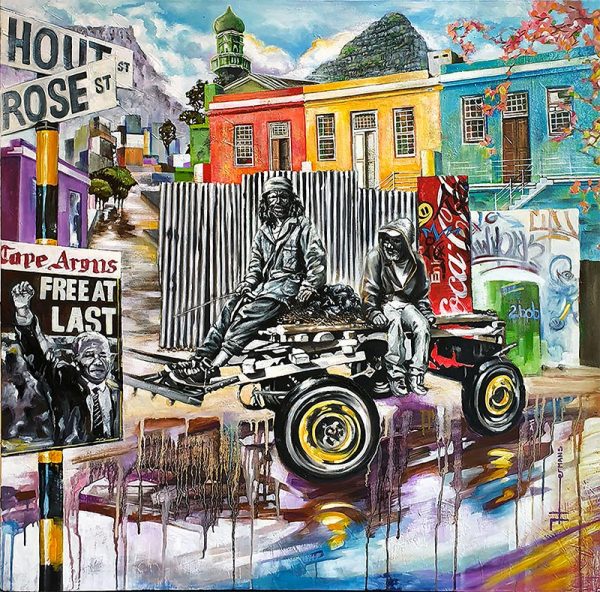 Hermans has a uniquely rich narrative style of painting that leads the viewer through a multitude of storylines, which are more than often evasive and open-ended, allowing the viewer to draw their own conclusions.

Fadiel Hermans was born in the Bo Kaap, and the memories of the area remain vivid in his mind. His work has a rich, narrative style, and he often uses several mediums, including ribbon, charcoal and found objects, to create his unique pieces.

Deeply inspired by his own memories of Cape Town and its people, he attempts to capture stories and images on each canvas. Some of the key themes explored in his work include memories of the colours, shapes, feelings and surroundings that he believes to have shaped him as a person.

Hermans told State of the Art: “Painting has been a constant in my life and is a deeply-rooted private and passionate attempt at making sense of my life, surroundings and experiences. I am constantly leading my eye and hand down the many, many pathways of stories and images floating around in my mind, with the hope of capturing some of them successfully on canvas.

“My work is all rooted in my memories and experiences, whether it is a certain colour, the way I try to capture light and shadow, the idea or even the feelings I try to evoke.

“Our creativity I believe stems from the ability to see things differently to the next person.”

Hermans has a uniquely rich narrative style of painting that leads the viewer through a multitude of storylines, which are more than often evasive and open-ended, allowing the viewer to draw their own conclusions.

Hermans said if he could ever get one painting to look at in life it would be Lovers in a Cinema by Deborah Bell.

“Besides it being a beautiful painting it makes me nostalgic for a time gone by. It speaks to the younger me,” he said.

He describes his creative process.

“I never have preconceived ideas of a finished piece. It always starts with smears, wild gestures and a lot of messing. From these gestural strokes an image or idea is formed, and I will explore it with many changes along the way,” he said.

Hermans describes his artistic edge as a tickle.

“Imagine a tickling, itching sensation right behind your kneecap. It’s there, you feel it, it drives you insane, you scratch at it, you rub it, massage it, but all you get is temporary release. That is what the process of painting is for me… temporary release, until the next one,” he said.

He describes his greatest achievement as being able to have the opportunity to invite his maternal grandmother and parents to view his work hanging at a temporary exhibition at the South African National Gallery.

“Being the encouragement for my passion all the years it was my way of validating their belief in me and my journey,” he said.