Skubalisto believes graffiti is the most noble of artforms.

Skhumbuzo Vabaza better known as Skubalisto grew up an only child and he had to be creative about having fun hence his overactive imagination.

This led him to start drawing and he knew then there was no going back.

Skubalisto said: “In primary school, we would have drawing battles and draw animated versions of each other, and the loser would have their animated drawing spread through the school etc. I was not out there picking on people in a malicious way it was all in the spirit of competition.

“In the days when making mixtapes for romantic interests was still a thing, I was the guy people went to. I used to make custom cover art for mixtapes/CD’s, burn the music and sell it to friends. Most importantly I used to draw my father using stories my mother, family and his friends used to tell me about him as references. This played a big role in my coping with his early passing and was the one true catalyst to my lifelong pursuit of turning feelings and emotions into art.”

Skubalisto believes graffiti is the most noble of artforms.

He said: “It is created anonymously with no monetary reward in the dead of night. Most graffiti writers are basically superheroes in real life and on top of all that our history will be passed down through graffiti-like it has for thousands of years, through cave paintings, and hieroglyphics. Street art is the spoilt stepchild of graffiti and it comes in many different forms that I would burn all my data trying to elaborate on.”

He added that his works are a fusion of all his influences.

“I was obsessed with cave paintings in school, because in a very westernized art history syllabus, this was the most honest representation of my people and the history that I could connect to,” he said.

“Graffiti was basically like the street newspaper and I would spend most of my high school years biting peoples letter forms, trying to imitate characters etc. I had a short career in writing, not long enough to call myself a writer, but long enough to become very proficient with a spray paint can.”

When it comes to creativity, Skubalisto believes every human is a creative being that has either been untrained/brainwashed at school or does not have the self-belief/confidence to explore that side of themselves.

Murals and the role of artists

Skubalisto has painted many murals; most notably around Langa in Cape Town. 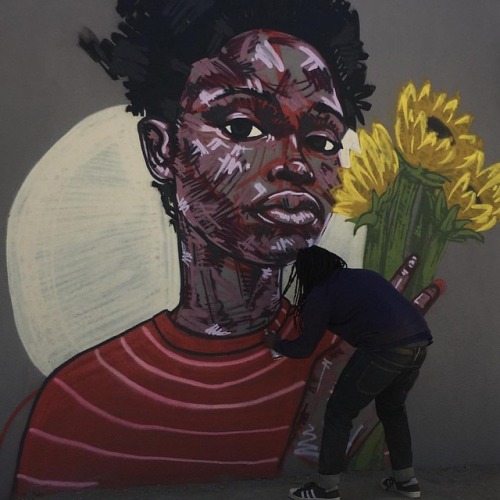 “I like to paint and even more than that: I like to paint BIG! Nothing can compare to using your whole body to create, it feels like a composition of performative visual art that literally leaves your lungs burning from the fumes, your muscles burning from the ladder trips, and crouching low. Painting murals is literally my first love and was the key to everything you see today,” he said.

He added that when galleries said no to his works, it’s the people’s validation of his murals that kept him going.

“Support and validation from everyday people on the street and online literally kept the fire burning to a point where it got too hot for galleries to deny,” he said.

“Every painting is a success, even the ‘failed’ ones, for they are all moments I learn from. All my paintings are close to my heart.”

Skubalisto also believes the role of an artist in society is to tell their truth.

“To mirror our times, for regardless of what the news say I feel that artists are the true communicators between the powers that be and the people. Lastly, I feel that our role is to fill the emptiness that consumerism, advertising industry and social media creates in the human spirit. That often leaves one feeling like they are incomplete,” he said.

Cities and laws against graffiti

Whether it’s tagging (the stylized writing of an individual or crew’s name), posters, stickers, installations, murals or mosaics, graffiti has always been a contentious issue.

Many metropolitan areas still outlaw graffiti on public property and this stifles many artists.

But not all cities view graffiti as a bad thing. Over the past few decades, it’s increasingly become part of mainstream culture. Some places have actively promoted graffiti and encouraged artists to work in public spaces.

Skubalisto said: “Cities work in a simple yet extremely violent manner. Everything is owned by someone. If you are not in that circle of owners, then your “value” or importance in that space is very little to none.

“In this way the only people who can have access to the visual landscape of the city are people who have close proximity to this ownership (business, family, friends etc), other companies or established artists who are endorsed by galleries or people within these circles.

“Graffiti disrupts the whole notion of ownership. Someone who is technically “no one” can have access to the visual landscape that is reserved for people in this inner circle of influence.”

Black artists and monetizing your work

During the past decade we have seen a lot of black South African artists getting recognition throughout the world and the price of their art simultaneously rising.

Skubalisto said: “I think black South African artists have been getting recognition overseas for years, this is not a new phenomenon. The difference now is the scale at which it is happening and the variation in subject matter.

“Our creative elders had a specific narrative to address, which played a big role in the world being so informed and conscious about the struggles that were and still are going on at home. I feel like today the role of artists in the international light is still the same but the scope at which we can communicate our stories has gone from a micro to macroscopic.

“We now have the freedom to celebrate our culture, tradition, society and people without diverting from our duty and diluting the impact of our work.”

His message to emerging artists is: “Be inspired by other artists but do not ever make the mistake of letting that inspiration turn to competition. We as artists are in the realm of self-exploration and the more you can dig deep and find a way to turn the normal into the sublime the better. Competing with other people takes you out of that internal space of exploration! Compete with yourself and be inspired by everything!!”

When it comes to monetizing his art, Skubalisto believes he sells his time just like everyone.

“Through time and practice the value of my time is increasing and I am getting the freedom to have more creative control over everything I make/sell. Started off on the opposite end of that spectrum, painting commissions, family portraits, corporate buildings etc but I am thankful for every moment and opportunity for they’ve all opened doors and helped me become versatile.”

#SAVETHENIGHT Promises A Night To Remember