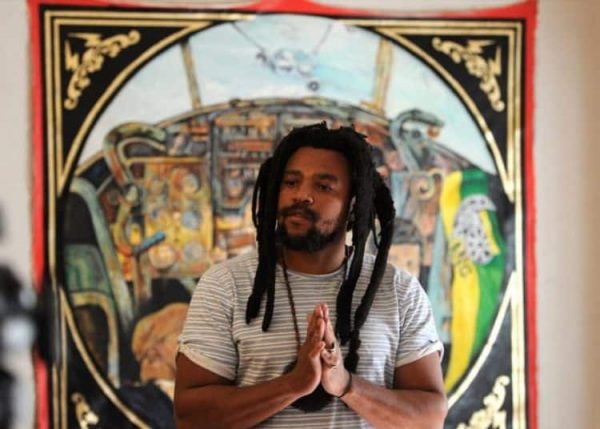 Although controversy seems to follow him, you cannot deny the talent that is Ayanda Mabulu.

Ayanda Mabulu is a self-taught artist whose work focuses on social upheavals and matters affecting the politics of the black body.

He currently lives and works in Johannesburg.

Mabulu is best known for using hyper-realistic imagery in his paintings and sculptures to depict and juxtapose powerful leaders, masters, and mistresses with defenseless victims of greed, oppression, poverty, and systematic racism.

Tackling the issues of inequality and his experiences in South Africa society, especially those that set the black body as an area where violence occurs, Mabulu is an internationally recognized South Africa artist.

The discourse of power, culture, and identity arranged in narrative sequences that further exaggerate the already grotesque history of exploitation and its inheritance plays itself in his work. Mabulu’s narrative is exhibited daily in the minds of his people and dances on their tongues during conversations that seek to rebuild the global black community.

Mabulu told Kalashnikovv Gallery: “I don’t think that there can ever be another way; does a hunter, face the beast without disturbing and confronting it with a dagger, more especially when the beast attacks. There can never be any other solution but to stand toe to toe with the beast, unless you want the situation to change to where the hunter becomes the hunted.”

“In this case how can an artist find a ‘polite and subtle’ way to address and depict social issues of our time were the human condition is deteriorating because of the style of politics inflicted by those in power that leave them starving and desperate so they can easily controlled.”

Blame it on the Boer.

The painting received little critical comment at the time but was rediscovered as part of the political controversy surrounding fellow South African Brett Murray’s painting (The Spear) in May 2012.

Mabulu criticized Zuma and the African National Congress for their response to Murray’s satirical painting – and that of the Nazareth Baptist (Shembe) Church, who called for Murray to be “stoned to death”.

He questioned their motives in attacking it, having ignored Mabulu’s own work – which depicts Zuma alongside Desmond Tutu, Robert Mugabe, Barack Obama and Nelson Mandela in a similar fashion.

The debate provoked a response from the Worldart Gallery, where Mabulu’s other paintings have been exhibited.

In 2016, Ayanda released a new painting of President Zuma performing a sexual act on Atul Gupta, the wealthy Indian-South African businessman who has been accused of influence over the president.

The painting was accused of being extreme and condemned by many. South African newspapers and media reported widely on it and there were mixed reactions from across the country.

Mabulu may be controversial but his works open dialogue to freedom of speech, and this makes him an important figure in the art world.