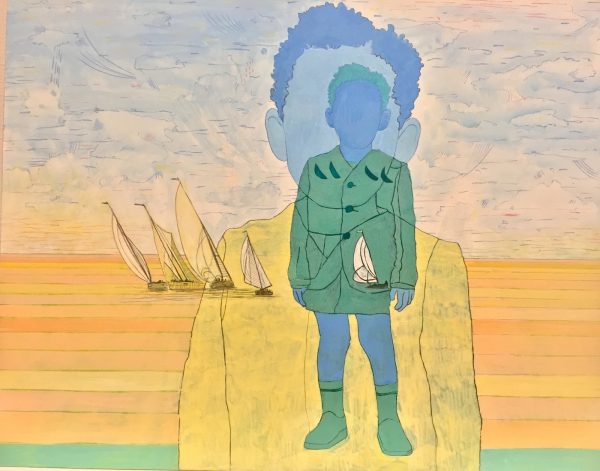 One could describe her style as an Afrofuturistic approach in terms of tactile features of the painting.

Pamela Phatsimo Sunstrum’s multidisciplinary work encompasses drawing and animation, and alludes to mythology, geology and theories on the nature of the universe.

Her drawings – narrative landscapes that appear simultaneously futuristic and ancient – shift between representational and fantastical depictions of volcanic, subterranean, cosmological and precipitous landscapes.

A recurring theme is Utopia and many of her work’s titles indicate that.

For Sunstrum it is a call, signaling towards those utopias – whether they are imagined or not. Her works on paper, stop-motion films and large-scale installations are all somewhat autobiographical, and with them she is creating her own modern-day utopia.

One could describe her style as an Afrofuturistic approach in terms of tactile features of the painting.

According to Widewalls, the drawings and installations of Sunstrum allude to the beginning of time, Earth’s structure, geological explorations combined with ancient mythological musings and creatures.

Her work appears futuristic with an ancient vibe, with landscapes in which influences can be traced all the way to notions of the sublime in European Romanticist paintings.

It is a very delicate combination of all those past, future and imaginary worlds that can be found in the art of Sunstrum.

She recreates sites both real and imagined, a concept that was very popular in Romanticism with the discovery of antique sites such as Pompeii.

Driven by that fascination with mythologies and scientific theories her muses represent time, geological concepts, and universe.

Sunstrum was born in Mochudi, Botswana, but grew up in South Africa, Malawi, Sri Lanka, Sudan and Canada.

Being a modern-day nomad, she completed her Master’s in Fine Arts at the Maryland Institute College of Art in Baltimore, USA.

Later, she started working and living in Johannesburg.

Traveling a lot influences one’s life, and driven by experiences that come with traveling, Sunstrum explores how a person develops their own identity within a wide range of cultural and geographical concepts.

Without boundaries of living in one place, and having to accept that particular cultural heritage, a person is able to combine all cultural influences.

Her work is rooted in autobiography and is addressing to that construct of transnational identity and cross-border rituals.

Having lived in Africa, Southeast Asia and USA, Pamela developed an alter ego – Asme, who is often depicted in her work.

According to Pamela, Asme is helping Pamela to convey her unfixed and not yet fully evolved identity.

See more of her works here.