Shabangu was the recipient of the David Koloane Award and as a result he engaged in a four-month residency at the Bag Factory, under the mentorship of prestigious artists David Koloane and Pat Mautloa.

Senzo Shabangu was born in the village of Driefontein, Mpumalanga, and spent a large part of his childhood living at an apostolic mission station.

Imagery from this time in his life features regularly in his work. His work explores themes of alienation, identity and space. 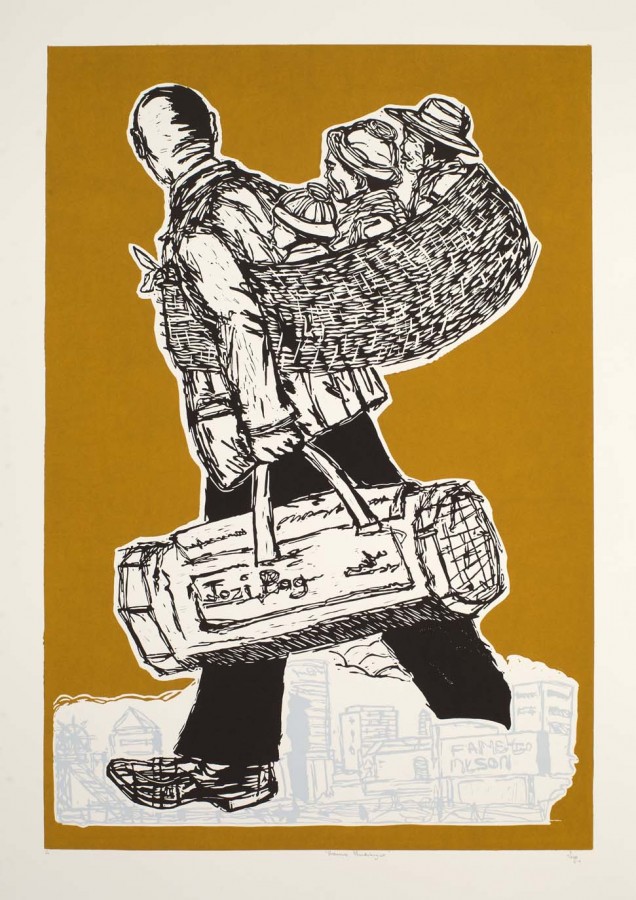 Shabangu came to Johannesburg in 2006 after completing his Matric, and although he had dreams of becoming a pilot, he ended up studying printmaking at the Artist Proof Studio in Newtown (2006-2008) after being introduced to the medium through the Taxi Art Education Program at the Johannesburg Central Library.

Although this was the beginning of Shabangu’s formal artistic training, he had been drawing on his own since childhood.

In 2008 Shabangu’s work was chosen to represent the Many Voices, One Movement Global Conference, for which he produced an edition of linocut prints for the conference attendees. 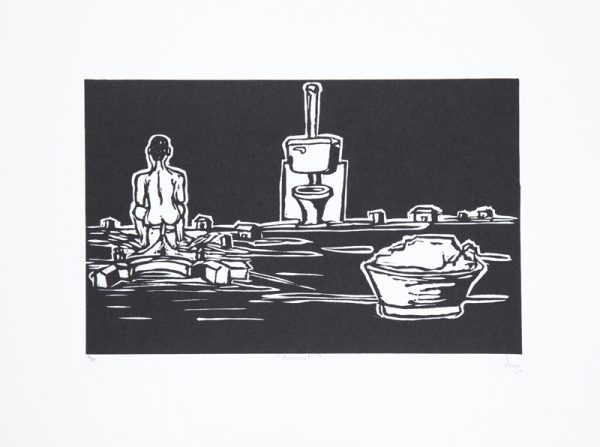 Shabangu’s work was also selected to form part of the advertising for the World Art Summit at Museum Africa in 2009.

Early in 2010, Shabangu was the recipient of the David Koloane Award and as a result he engaged in a four month residency at the Bag Factory, under the mentorship of prestigious artists David Koloane and Pat Mautloa, and had the experience of working with resident artists from around the world.

Shabangu began working on monotypes at the David Krut Workshop (DKW) at Arts on Main with printer Jillian Ross in 2010.

His monotypes depict scenes of the Johannesburg CBD. He often places city landscapes emerging from below and suspended above his characters creating an almost claustrophobic sense of being surrounded by the city.

Within this theme, Shabangu also deals with movement in the city and how people are moved. 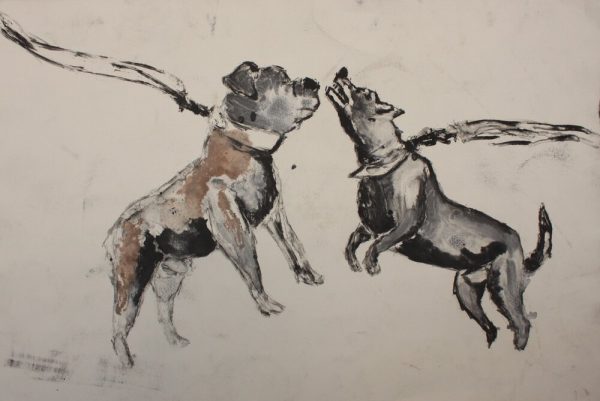 Many of his works look at how people live and the politics surrounding forced removals. Shabangu moved on to making linocuts in 2011 at DKW Arts on Main and he moved into the DK Workshop on Jan Smuts Avenue in July as an artist in residence in preparation of his solo exhibition in the space, Naked Pressure.

He continued to print at DKW creating new works for his 2012 exhibition Amandla! at Arts on Main.

This was followed in 2013 by Obssession, his first show in the main gallery space on Jan Smuts Avenue, as well a concurrent exhibition in Cape Town, titled Recollection: Works on Paper.

Obsession was inspired by social issues that influence everyday life for those living in South Africa – the media, protest actions, men in robes and judges are the underlying sources of imagery.

Shabangu is a firm believer in community work and in helping young artists achieve their dreams.

On a trip to the Biennale in Kampala, Uganda, Shabangu was again inspired by his drive to share what he has learnt and to help artists from around Africa get exposure in the art world. 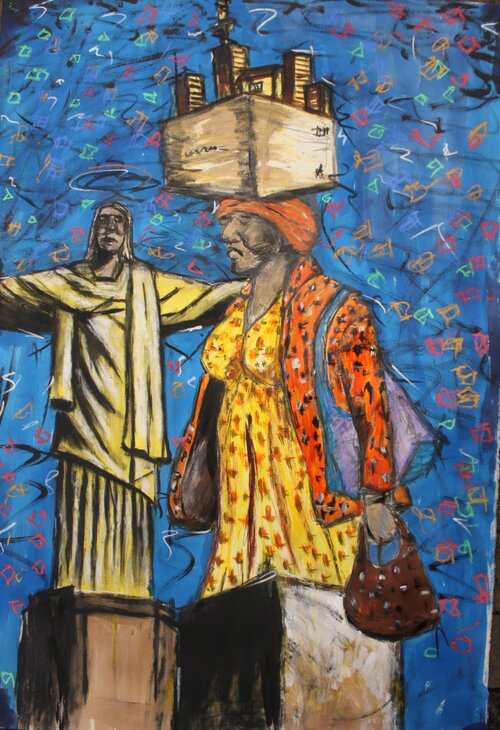 Not forgetting his own dreams, Shabangu started his pilot training at Rand Airport in 2012.

He is currently producing works in his new home and his art studio in Gresswold, St Benedict Road in Johannesburg. He recently collaborated with a group of artists at a retreat in Knysna – sharing and experiencing various mediums.

He is now an independent artist;  and he collaborates with a few South African Galleries and abroad.

Must Watch: ‘Jingle Jangle: A Christmas Journey’ on Netflix

Have You Seen HOMESICK by Folktale Johannesburg?
Join the ZKHIPHANI Fam!