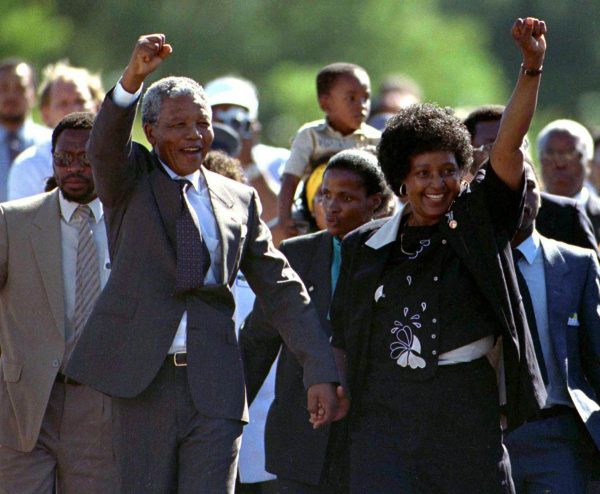 A sea of excited supporters held back by police had lined up, all trying to get a glimpse of their just-freed leader who had spent 27 years in prison for fighting against the country’s discriminatory apartheid system of racial segregation.

#MandelaReturns President @CyrilRamaphosa : many South Africans stood here with their emotions high, our freedom had finally arrived and the day he was released is the day we know apartheid was dead and klaar. #sabcnews pic.twitter.com/lQkV7UfB6o

30 years ago, on this day I was in Cala. We waited impatiently for the first glimpse of Madiba. I remember not knowing which one in the black and white tv picture we were watching was the actual @NelsonMandela.Eventually someone said “he is holding Winnie’s hand”. #MandelaReturns pic.twitter.com/Q3g8Wj0QeX

As we celebrate the day one of the world’s greatest leaders walked out of prison, South Africa and the world music fraternity lost a legend in Joseph Shabalala, founder of Grammy Award winning band, Ladysmith Black Mambazo.

South Africa is in mourning and tweeps tweeted their condolences.

We would like to extend our condolences on the passing of Joseph Shabalala who was the founder of the group Ladysmith Black Mambazo. Ulale ngoxolo Tata ugqatso lwakho ulufezile. #RIPJosephShabalala [Photo: Flicker: Seth Gordon] pic.twitter.com/Sazg9hoWew

My friend… a giant humble man , Joseph Shabalala, passed away this morning.
My sincere condolences to his family and friends #RIPJosephShabalala Rest In Peace Joseph 😰 pic.twitter.com/YkLggD6EPM

On a lighter note, the “standing broom challenge” is back and the science behind it is as bogus as ever. According to a viral tweet, “NASA said today was the only day broom can stand up on its own because of the gravitational pull.”

In fact, NASA made no such claim, but the internet loves a challenge and so they got behind this one — with varying degrees of success.

NASA: today is the only day a broom can stand.

On a philanthropic note, DJ Tira blessed a tertiary student with R5000 for their studies after running a challenge on Twitter to see who deserved it more.

Okey this is a bit hectic for me. If there is a tertiary student with good results I’m ready with this 5 Sgodo!

14:00 I want to announce the winner! #ShowMeYourResults#DjTiraGiveMeThisR5000Because