The last Friday of the month is always a jump. Check these events out this weekend.

This Friday catch legendary South African lyricist/MC Stogie T as he performs material from his latest studio project, THE EMPIRE of SHEEP, at Untitled Basement in Braamfontein.

Stogie T ‘The Empire of Sheep’ live!! Link in bio

Come Saturday the 29th of February at Victoria Yards in Johannesburg, Feel Good Series presents UMI: Our Music Festival, the mother of all Feel Good’s.

Event organizer Nandi Dlepu AKA Mamakashaka said: “With UMI we take the ethos of our Feel-Good Series events and we up the ante!”

Victoria Yards will be transformed into a creative fun house of music, film & art.

Tickets are R250 on Quicket.

‘Unknown Union’ by @crossmakere will be screening at #UMIOurMusicFestival this Saturday! Tickets available via link in bio • We would have loved to screen Darkie Fictions LITTLE AMERICA but due to Post Production delays we’ve got another local gem taking its place.

If you are in the south of Johannesburg, the Nasrec precinct is hosting two major events on Saturday.

Tickets are still available at https://ultrasouthafrica.com/tickets/johannesburg/

The site maps for the 7th edition of Ultra South Africa are here!

Navigate your way around the venues in Cape Town and Johannesburg and plan out your experience by exploring the locations of our stages and other exciting amenities at #UltraSA2020. pic.twitter.com/UvgP4y2zpd

The other big event is the Soweto Derby between Orlando Pirates and rivals, Kaizer Chiefs.

The two teams will meet for the 169th time when top of the table Chiefs visit third placed Pirates at the FNB Stadium on Saturday afternoon.

Like many other encounters in the last half a century, the game will be played in front of what will be a capacity crowd at the iconic stadium in a game that could help shape the destiny of the league title.

Tickets are sold out so if you are a soccer fan just watch on the telly at home or your favorite sports bar.

Sunday sees the return of First SunDaze which will be a picnic at 4 Fourie Street in Observatory. Langa Mavuso, Spha Mdlalose, Aus Tebza and more will be performing and tickets are available at Quicket. 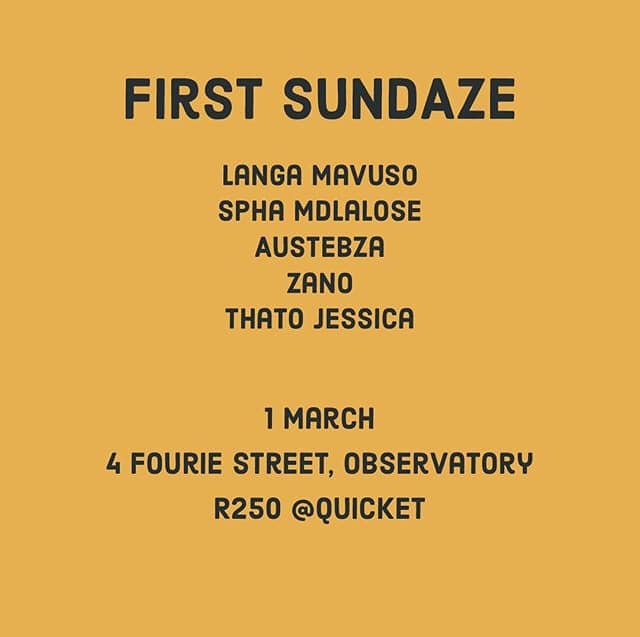 In the heart of Soweto Moja Café in Orlando East hosts one final Deep in The City event before he starts touring on 1 March.