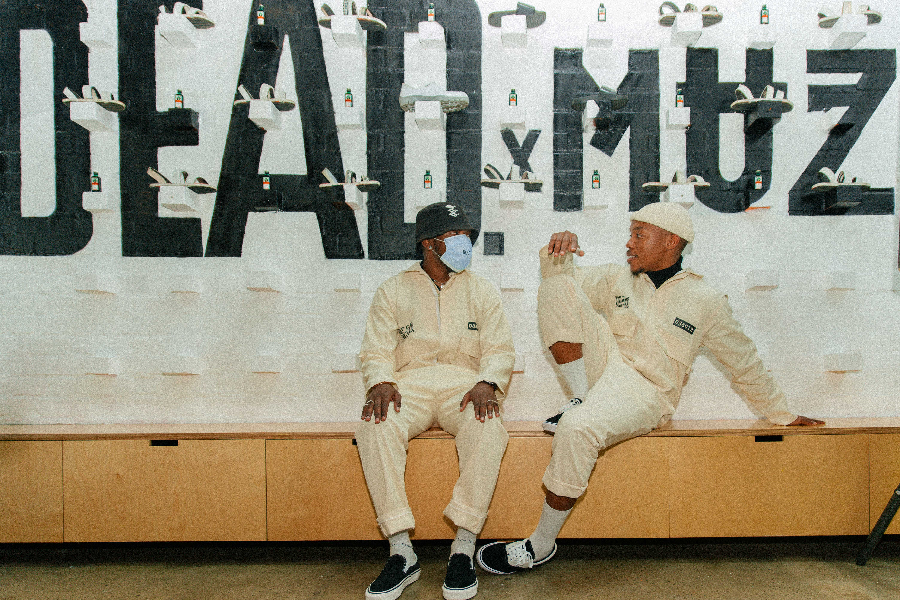 It all took place at DEAD x MUZI pop store.

On Friday, 3 May DJ, MUZI dropped his much anticipated 4-track EP, Stimela Segolide. A WE.THE.BUNDU release, the EP is a sonic commemoration of the historic gold mine migrations in Apartheid South Africa.

The EP was released in conjunction with a 4-day pop-up store in Braamfontein (02-05 May 2019), Johannesburg and a 4-day mobile pop-up tour around Pretoria & Johannesburg. The DEAD. x MUZI pop-up store, a collaboration between leading SA streetwear label and Muzi, launched on Thursday 02 May, to a hugely oversubscribed and ecstatic crowd lining up to get an exclusive first listen to the EP performed by MUZI atop a custom DEAD. x MUZI stretch taxi.

Fans throughout the weekend got the opportunity to be the first to purchase items from the never-before-seen and limited-edition collaboration and were also treated to an impromptu in-store MUZI DJ sets.

On Saturday 04 May, MUZI and Bangy hosted an intimate question and answer session with fans on all things DEAD. x MUZI and Stimela Segolide. See below the best take-outs from the afternoon:

Q: How did the DEAD. x MUZI brands come together for this collaboration?

A: MUZI: Bangy and I had met on the set of a shoot where he was the stylist and I, one of the featured artists. At the time, I had not made the connection between Bangy and DEAD and because I am not a fan of being styled, we originally had some friction on set *laughs* but as time went on, we got along well. When we started the collaboration project, I let him do his thing because I trust him, what he does and who he is.

Q: Why the decision to make the items of clothing that are included in the DEAD. x MUZI collab?

A: DEAD.: As DEAD’s first collection release for 2019, this collaboration was initially meant to consist of overalls alone as the hero item. The overalls are inspired by the Stimela SeGolide theme of worker migrations to the mines during apartheid and speak to the EP the most. As the production process moved forward, I knew that we had to add t-shirts; it’s an everyday staple and one item that everyone can have access to. The addition of hoodies to the collection was purely functional due to the season we are approaching.

Q: How do you relate to Stimela Segolide?

A: MUZI: It’s the story of my grandparents. My grandfather used to wear a one-piece overall to work and that’s where the idea to make overalls with DEAD came from. So, it’s largely inspired by what my mother told me about her parents; her dad was far way working and her mother was a domestic worker and raising white children whilst her child was at home. I thought it was important for me to share that as I feel like SA artists don’t share enough of our stories due to the shame of our past.

The tracks on the EP reflect a lot of layers to this; the lead track (Stimela Segolide) is from my mother’s perspective and there is a track (iNtombi) about a distant love – how a relationship must work when one partner is far away grinding and how that leads to men building new families in the cities that they work in. The final track (Baba) is about forgiveness; when you know you won’t get that apology from an absent father, but you must forgive in order to move on. It’s real and sensitive but I wanted to talk about it and remember it while entertaining in an honest way.

Q: What is the official EP artwork inspired by?

A: MUZI: The artwork, which is a painting by Lulama Wolf depicts how women had to sustain the home engine while men were away mining in Johannesburg and other big industrial cities. There is a family engine that the man thinks that he is pushing by sending money home, but the real family building is being done by the women left behind. So, that’s where that comes from and shout-out to Lulama for highlighting that in her creation.

Q: Muzi, you have shared a lot of what inspired the music in Stimela Segolide online; how did you want that to translate in the apparel?

A: MUZI: When I had the idea to create Stimela Segolide, I saw it as an opportunity to do multi-genre collaborations in its roll out, which is rare to see now. So, with the EP title, creative freedom was given to all the collaborators to interpret it in their own ways through their art mediums. Bangy managed to do that with the merchandise, Lulama Wolf did it with the EP artwork and ByLwansta is doing that with the animated video. It’s a story that we can all somewhat relate to; the head of a household leaving their family to work very far away in order to provide. So, just as the EP is a multi-faceted story of what that dynamic did to families, so too is the production of all the collaborative creative elements of the project.

Q: Why was it important for you to launch this EP and collaboration in such an experiential way for the consumer?

A: DEAD.: It’s all about the experience! I’ve found that that’s what’s missing here (South Africa) quite often. We are often too focused on getting money from the consumer without giving them an experience to remember; one of the reasons why retail and fashion is suffering so much now.

A: MUZI: Yeah, creators can be too motivated by money and forget about the person that gives them the money. This is something I try to remember with everything I do; my shows are always free to enter with food and drinks provided for attendees because I want to take care of people who take the time to indulge my creative outputs. I would not be here if it weren’t for people streaming my music; chasing gigs and money and forgetting my audience does not make sense to me. These are the people that take care of me; that’s my tribe.

Q: What were your highlights creating this project and are there plans to collaborate again?

A: DEAD.: I think the build-up to the launch event and production process were the highlights for me. I would never have expected to receive the number of RSVPs we got to attend the launch and listening party.

A: MUZI: Interacting with my supporters has been a huge highlight to me, I still can’t believe leave their houses to see me perform. Regarding DEAD. x MUZI going forward, we would love to visit different cities with the mobile pop-up. Because we’re so particular when it comes to creation, the concept & product may not be the same as this first phase roll out, but we want to expand now that we have laid the foundation.