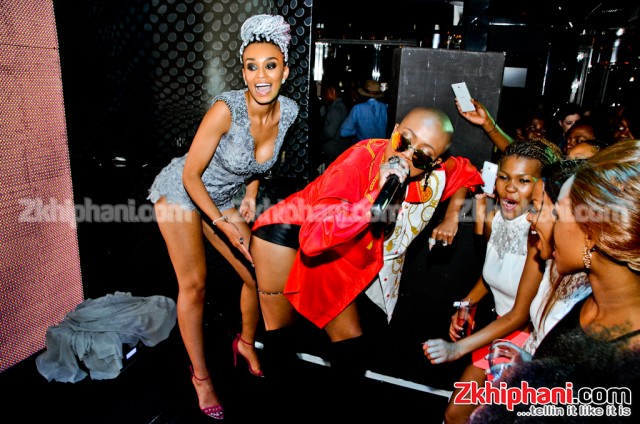 Pearl Thusi describes herself as “A young woman, a young vision, an open heart, a maturing mind”. Born and bred in Durban, with a passion for the entertainment industry, Pearl continues with determination to make her mark on the industry that she loves.

She is an actress, presenter, radio personality, voice over artist and an MC all while being an incredible mother to her daughter and an ambitious business woman. Is there anything Pearl Thusi cannot do?

Pearl’s ambitious nature has earned her appearances and roles in many well-known television and reality shows, such as Zone 14, Live Amp, Isidingo, Tropika Island of Treasure, to name a few.

She has MCed and hosted some of South Africa’s biggest events, such as The Metro FM Awards, the SAMA’s, Elle Style Awards 2013, Castle Lite’s Feel The Beat of Sub Zero Experience featuring Kanye West and the Extra Cold Music Concert featuring Timbaland, Nas and Wiz Khalifa.

This past Friday on 15th March, her friends, fans and followers joined her in “unleashing” her Official Birthday Celebration at Taboo Sandton.

The theme, “Unleashed” celebrates Pearl as the fiery Queen of Dragons, whose followers will travel from across the globe to marvel at her beauty and grace.

The Queen of Dragons conquers anything she sets out to achieve, conquering each realm she enters. She enchants those whose paths she crosses with her constant display of kindness, humility and fairness. Check out who was a her party…

Even the big dawg DJ Fresh was there

DJ Warras on the decks

Related Topics:a maturing mind”. Born and bred in Durbana young visionan open heartPearl continues with determination to make her mark on the industry that she loves. She is an actressPearl Thusi celebrates her birthday Pearl Thusi describes herself as “A young womanPresenterradio personalitywith a passion for the entertainment industry