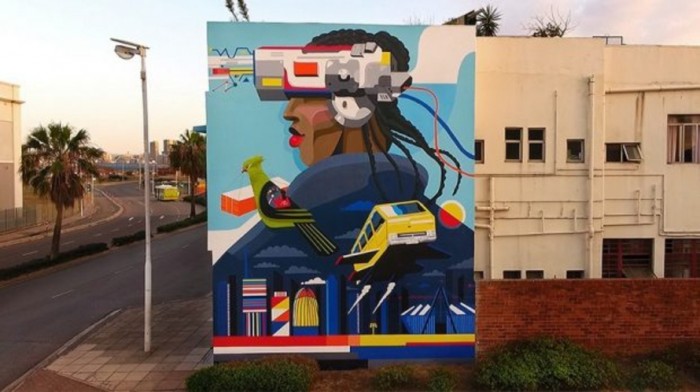 The Southapedia Mural Festival (SMF) is a programme that aims to support local artists through a collaborative initiative between artists and building owners.

The Southapedia Mural Festival (SMF) is a programme that aims to support local artists through a collaborative initiative between artists and building owners to create site-specific murals that celebrate our local culture.

These local artists include Paul Senyol (who was also part of the Design Indaba Emerging Creatives programme), Conform, Blessing Samukele and Gabriel Katsande.

The festival also worked with NGO, Surfers Not Street Children, where some of the artists hosted an introduction to street art for the children involved with the NGO.

Van Eeden told DesignIndaba.com: “My biggest inspiration to start the Southapedia Mural Festival was after I was invited to paint a mural for Staufferstadt Arts, in Virginia, US. The project involved bringing contemporary urban art to a rural town. Seeing how the art inspired and celebrated the town, inspired me to create something similar in my hometown.

“It showed me that with a bit of work it is possible to create something in Durban as well. Too often we wait for opportunities to come to us instead of creating them!”

Together the artists created three major murals around the city centre.

During the festival, van Eeden, collaborated with Samukele and Katsande to create a mural titled Back to The Future.

Sponsored by Innovate Durban, a company whose focus is on stimulating innovation in the KwaZulu-Natal region, the mural depicts a woman with a VR headset, with flying taxis and robotic birds in the foreground.

According to Van Eeden, the art is a commentary on what the future of Durban could look like, as well as the potential for growth and opportunity in the city.

The artwork of street artist, Conform, is made up of clean vector work, hand-drawn and organic shapes. The fluidity of the art comes from using pastel colours, adding a sense of calm to the work.

For the Southapedia Festival, he created a mural that celebrates the architecture of Durban and the city’s skyline.

Van Eeden said his inspiration comes from anything or nothing.

He said: “Because I’m the type of artist that simply draws from the imagination. I hardly use any references and only when I need to.

“Street art allows people to interact or put their mark on your work, and I am the kind of artist where I’m fine with those kinds of things because then it evolves into another kind of art form.

Speaking on the level of street art in South Africa compared to the world, van Eeden acknowledged the incredible amount of talent coming out of the continent and the industry at large.

He said: “Street art can be used to help uplift communities and shift perspectives, and since we are a developing continent, I can only see it growing and getting bigger.

“Street art is free to the public and has no boundaries or social status and is free for all that get to experience it. It is one of the artistic expressions that really can be experienced by everyone.”