Magugu has always explored the disparity between masculinity and femininity, tradition and experiment, overlarge and abridged and other differences in the design of his garments.

South African Designer, Thebe Magugu, has won this year’s LVMH Prize, making him the first African to be in the finals. On his first trip to Paris, Magugu, at 26-years old, was also the youngest of this year’s finalists.

Magugu spoke to Vogue and told them while he had long followed the Prize on Instagram, he almost put off his application until next year. He said:

As a creative you’re always questioning yourself, but people around me told me there was no harm trying. I went into it like a child and got the chance to speak to my design heroes like Clare Waight Keller and Nicolas Ghesquière. So, no matter the outcome, I already felt like I’d won so many things. 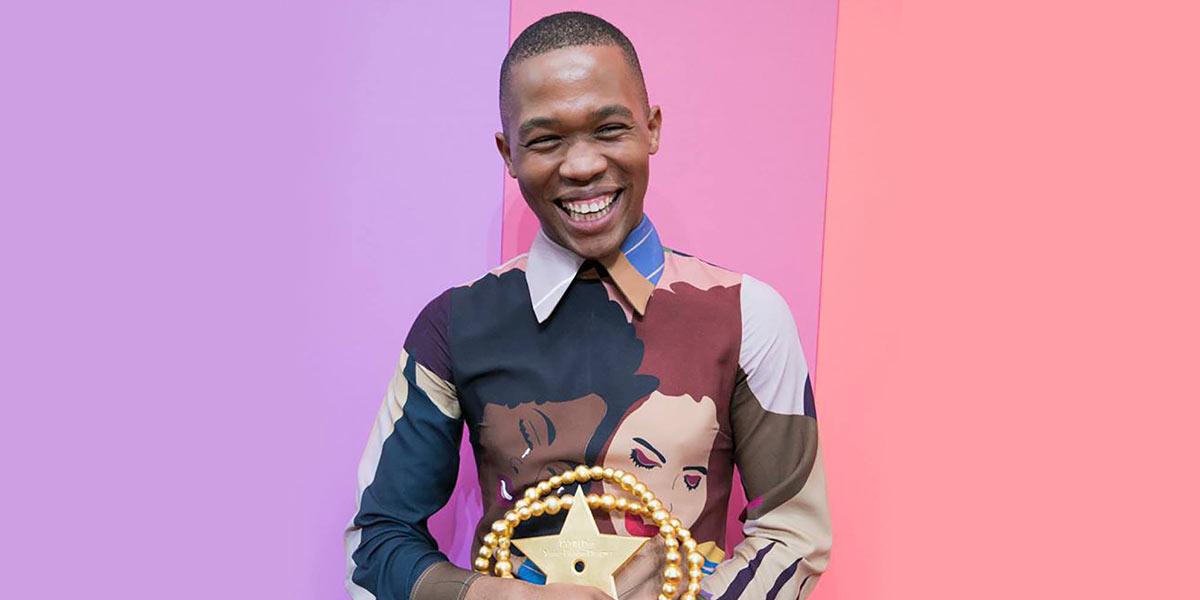 Delphine Arnault, the executive vice president of Louis Vuitton and the founder of the LVMH Prize, said:

The creativity of his designs is great—the colors, the cuts, it’s very feminine. We saw the talent, and we also saw the challenges—in export for example. It’s great to find talent with a huge potential.

Magugu beat 1 700 candidates from 100 countries to claim the top prize that includes €300,000 and a one-year mentoring program from LVMH.

The young designer has had a busy year. Earlier this year he won the 2019 International Fashion Showcase. He was then announced as one of the eight finalists for this year’s LVMH Prize. The designers selected included: Nigerian Kenneth Ize, British designer Bethany Williams and Hed Mayner from Israel, who all had to present a collection to more than 63 judges including Dior creative director Maria Grazia Chiuri, Louis Vuitton creative director Nicolas Ghesquière, US designer from the eponymous label Marc Jacobs, and the executive vice-president of Louis Vuitton, Delphine Arnault.

Launched in November 2013, the LVMH Prize was created to honour and support young fashion designers around the world. Every year, a young designer and three graduates from fashion schools can claim the prestigious prize.

Previous finalists include Virgil Abloh, Craig Green, Jacquemus and Demna Gvasalia, who have all gone to have very successful clothing labels.

Born in 1993 in Kimberley, Magugu was inspired by the women who played important roles in his life, namely his mother, Iris Magugu; his aunt, Esther Nenungwi and his late grandmother.

He studied Fashion & Apparel Design at LISOF Fashion School in Johannesburg and has always explored the disparity between masculinity and femininity, tradition and experiment, overlarge and abridged and other differences in the design of his garments.

Sleek, forward-looking design intersects with motifs from our continent’s storied past, providing smart, multifaceted clothes as valuable as their women.

Magugu shared his future: “My overarching mission as a designer is to showcase a contemporary South Africa. So many people have stale ideas of what that means, and I really want to change that. There are so many creatives doing incredible work in South Africa. I’m looking forward to traveling but I really want to stay there because it feeds my own creativity.”