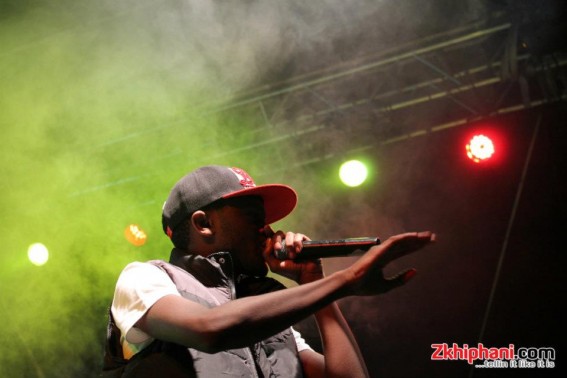 We recently attended an event in the East Rand at Katlehong, Huntersfield Stadium courtesy of Rudz Concepts and boy oh boy was it an interesting one, the aim of the affair was to raise awareness about global warming and the message conveyed was that “the Colour Of Music Is Green”. The music festival will used music as a catalyst to inform and educate the South African public about global warming. The MC for the night was originally supposed to be Mo-Flava but I was surprised to see the young rapper Kwesta also known as “Mr Cool” holding it down and entertaining the crowd, who knew? I actually thought he was a shy guy but it turns out he is very funny and engaging. The members of Micasa J’something, Dr Duda and Mo-T gave an awesome set as usual; they were all wearing interesting t-shirts written “sanbonani”.

DJ Sbu the king of the East Rand who has been recently making tabloid news for allegedly ripping off Zahara played a soulful set smiling and interacting with the crowd, winning back their love and respect back slowly but surely. Teargas came on stage with the two remaining members of Cash Time fam and they all performed the Teargas crew’s classical hits, Another interesting act on stage was DJ Fresh who also played a lot of classical tunes with a little twist as he was joined on stage by a percussionist as well as a trumpeter, Culoe De Song, DJ Kent, , AKA, Kwesta, Zakwe and Khuli Chana also performed at this historical occasion. Check out more photos of this event at the gallery page or follow this link http://www.facebook.com/media/set/?set=a.10151100558658327.531125.154579103326&type=1&aft=10151100658803327