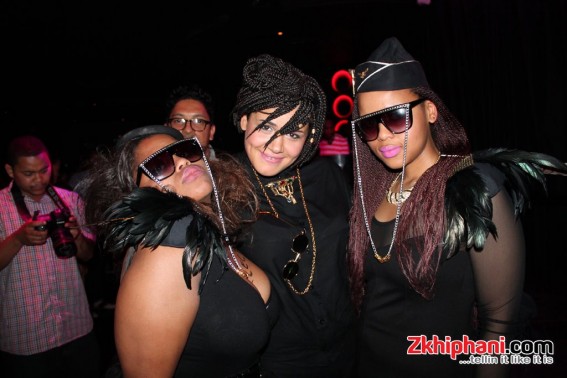 Zaki Ibrahim and her backing vocalists

Globally distinguished singer Zaki Ibrahim hosted a bunch of people to a mini-show at the hush club in Rosebank this past Thursday on the 30th of August for the launch of her new music video for her latest single release called “go widdit”. The multi-dimensional vocalist who is also known as a storyteller, performing artist,director, choreographer and fashion icon was accompanied by the recent popular dance team who go by the name of vintage crew who are also part of the video cast. Zaki is signed by motif records which is co-owned by the hip hop MC Tumi from the volume and her colleagues who are also signed at the same stable such as Reason came to the club to show some support. The event went quiet well and I must say Miss Ibrahim has produced some good music and a lot of effort is put in her music video production but she is still kinda underrated, hopefully this new music video will change all that. You can check it out by following this link https://www.youtube.com/watch?v=MGr83pXeM9o

For more photos of this event check out this link http://on.fb.me/PV3bAY